A lecture and demonstration of local recipes in the small garden of the "Chapter Room" in Agde.

This evening, entitled "Having Your Say", was organized within the framework of the enhancement of Agathois heritage by the association UBIK ART in collaboration with the Heritage Mission of Agde.
The guest speaker for the evening was Michel Adge, formerly a professor of physics, an impassioned and fascinating scientist who loves and defends the Agathois heritage from the Canal du Midi, about which he wrote a thesis in 2011 regarding the fauna and flora of Agde and its region, and about many other subjects as well. He is also the President of "l'Escolo Dai Sarret" (the founding association of the Agathois Museum Jules Badou) and a Chevalier of Arts and Letters.
This superb demonstration took place in the presence of Gilles D'Ettore, Mayor of Agde, Yvonne Keller, alderwoman in charge of cultural affairs, and Christine Antoine, city councillor and Heritage delegate, as well as the 33 invited guests.
The evening's program consisted of speaking about Agathois heritage and demonstrating two recipes, first of all the method of cooking chick peas " in a way such that one could not play marbles with them" and also the way to beat an egg without using mustard as "here, there are only kitchen workers who think you must beat an egg with mustard...."
"I want to go against certain popular beliefs and in particular the belief that the Agathois language is only good enough for the colonists who come from the northern part of France... Once the Agathois population was of foreign origin, but the people who came to Agde settled themselves into the local population, taking on the Agathois ways of speech and dress, whereas now the Agathois are interlaced."
"Our language has become a forgotten language and it is going to disappear. Optimistically speaking, we who know how to express ourselves in the Agathois language are only a few in number, around 10, and in one generation, it'll be over. It will have disappeared."
Hence we have the attempts by L'Escolo dai Sarret, of which Michel Adge is the president, to save this language, so that "in 50 years, in 200 years, if a Japanese or a Turk has the intellectual curiosity to know how one spoke in Agde, how one cooked in Agde, that he can find documents for that."
All the while peeling conscientiously the potatoes and garlic, Miche Adge continued to expand on his view on life by applying himself to the cause in a tongue-in-cheek manner.
"I want to refer to a book written in 1970, "The Peter Principal", that one can sum up like this: each individual can raise himself only to his level of incompetence... that is why, tonight, I am giving a lecture on Agathois cuisine...." This made everybody laugh, himself as well.
"I have lived my whole life surrounded by women who were all excellent cooks. For my whole life, I have fed myself without focussing on what was going on on my plate. And then there came a moment where I had to pick up the baton and I suppose that I was imbued, little by little, with what was going on around me to the point that my mother, when I started cooking, told me that I was doing better than her. That was false, naturally."
All while watching the potatoes cook, he spoke to us about the books he had taken to heart, those collected and written out by his mother, and which he intends to complete and re-edit, "if my doctor gives me an extension. in 20 to 25 years." The recipes which it contains are the "recipes of the small-scale farm households of which some cost practically nothing."
Michel Adge, in returning to the theme of the event, spoke next about his way of cooking chickpeas. "The chickpeas have been cooked for two hours, with the only shortcoming being the lack of cloves. The three secrets for the best result is to let them soak at least 24 hours with bicarbonate of soda, use non-mineralised water and especially never reduce the heat below boiling."
Michel Adge added a bay leaf and some cloves of garlic, whereas his mother, for her part, had put in a whole head of garlic. Then came the explanation of his basic recipe for anglerfish which would be cooked with the potatoes, the garlic and the onions, and in which one would then incorporate aioli.
The audience followed attentively all his preparations and soon after, he served them a taste of these Agathois dishes. 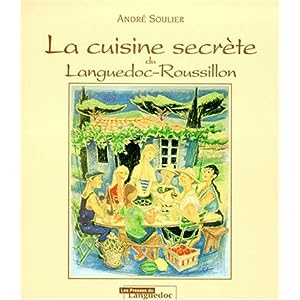